To inspect the action variables coming through, you can enable debugging (see below) and inspect the Actmgr logfile. In the example here, you can see the tv. variables outputted by a temperature sensor: You can therefore access the values of these variables using tv.AreaId, tv.AreaName, tv.Data, tv.KindId etc. read from down to up chronologically.

There are 6 broad categories of Variables in Gravio:

Referred to by adding a prefix of ap.
Action Properties can be defined as a property passed from the outside the Action when the Action is executed.

Referred to by prefixing av.
Action Variables are variables that can be referenced within an action. This could be for example Sensor Data.

Referred to by prefixing cp.
A Component Property is a value that determines the behaviour of a component. They differ vastly between different types of components.
For example, the POST component might have an URL as property, whereas the Gravio Light component has some color and illumination settings of the Gravio Light.

Referred to by prefixing cv.
Some variables are implicitly declared in the component.
For example, the cv.StatusCode contains the HTTP status code and response headers of the HTTPRequest Component.

Trigger properties set by event triggers and timer triggers can be referenced in actions.
Referenced by prefixing it with tp.
For example tp.KeyAreaName

Referenced by adding a prefix of tv.
The data sent by the sensor can be referenced in the Action program with the following trigger variables

It is possible to convert from each type to each type.

You can easily dump the value of all variables by activating the “debug” button on the top left corner of the step. If you enable it, Gravio will dump all variables to the console at the bottom: 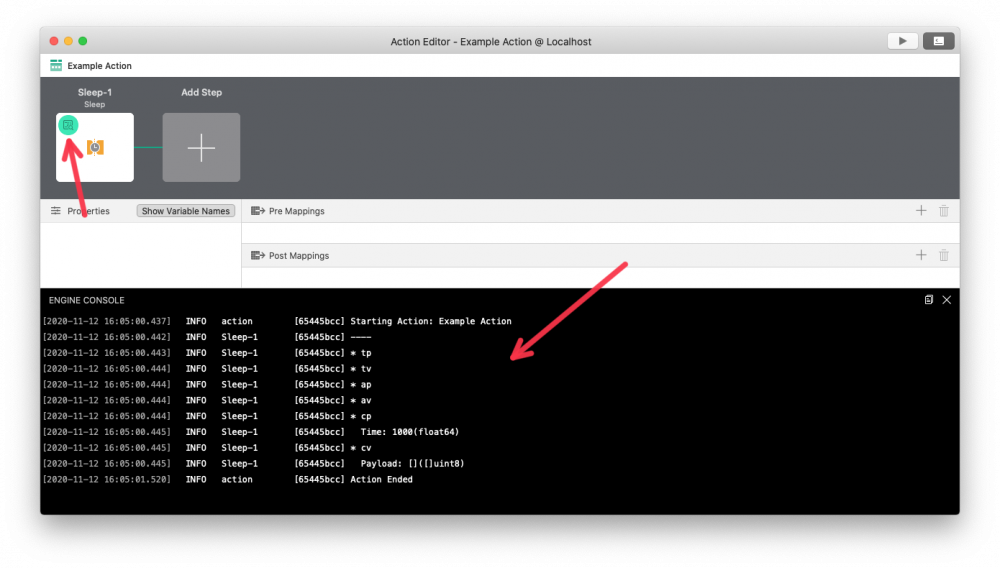 The variable values are also dumped in the actmgr logfile, which you can inspect in the logfile area of Gravio.

The variable handling in Gravio follows the schema according to github.com/PaesslerAG/gval